I love VeganMoFo. It’s one of my favourite times of year, and I love seeing the vegan blogging community come together with some of the most creative and fun ideas anywhere in the food blogosphere. But this year, I swore I was out. September is looking busy at best, and chaotic at worst, so while I vowed to take part over at veganmofo.com, I was sure things would be quiet in these parts. But just a few days ago, my defences fell and I succumbed to the contagious excitement- I was signing up before I knew what had happened!

So, here I am. Things will look a bit different to previous years- I had a theme in mind, but no time to execute it, so that will have to wait until next year. This month, things will be a bit less structured than usual- by which I mean, I still don’t know what I’m doing! I’m quite partial to the idea of daily themes, and I’ve always been fond of Jojo’s football food- and with Australian football heading into finals season and American football starting up again in September, that theme was definitely one to tackle.

Chadwiko is a huge Washington Redskins fan. But the life of an Australian NFL fan is an inconvenient one, with his love of the game forcing him out of bed at 3am on a Monday to stream it live. So in our house, football food is breakfast food. The season may not have started yet, but we decided to get training and whip up a junky, football-worthy dinner in anticipation. Tots (or potato gems, as they’re called in these parts) are one of Chadwiko’s not-so-guiltiest pleasures. Covered in nacho toppings, they’re his sports-viewing dream come true.

The recipe comes from the brand-new Bake and Destroy: Good Food for Bad Vegans, which I picked up in Adelaide over the weekend after Chadwiko flipped through the book in a bookstore and landed on this recipe. It was dude-food love at first sight. It’s a ridiculously simple recipe and not my usual style of cooking at all, but after a long day of travel and an evening flight home, it sounded pretty close to perfect. Topped with refried beans, tomatoes, jalapeños, guacamole and an old-school vegan nacho cheese sauce, these tots were definitely dressed up for the game. And while the look was a little less than polished, the mess was a fun and tasty one.

From my first glance, ‘fun and tasty’ seems to perfectly sum up Bake and Destroy. It’s a beautiful book, and it’s bursting with silly party foods (like totchos) alongside some more serious, from-scratch stuff. I’m looking forward to giving a few more recipes a try in the coming weeks- and the return of both football and Vegan MoFo seems like the perfect occasion for it. Do any of you have this book yet? I would love to hear any recommendations to narrow down the ‘must-try’ list! 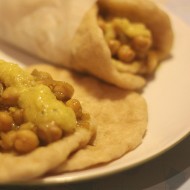 Error: Twitter did not respond. Please wait a few minutes and refresh this page.

I’ve become browsing online much more than 3 hours currently, but As i never determined any attention-grabbing guide like your... Hey! I just discovered this not-so-new page on your blog, and I LOVE IT! I am a 100% WikoFan. Say hi to Hank S & Pants for me! cool! I love reading about all the creative recipes! Testing is definitely a lot of fun, but it’s a lot of work too – I can see why you... Holy…wow. That dish looks insane! I want that so badly! Was it a very involved recipe? It seems like the kind of dish that would... Wow, those all sound so creative and delicious!