Spring has finally sprung here in Canberra, and to be honest it’s a little confusing. I think I’d forgotten what it was like not suffer immediate facial hypothermia upon opening the front door. And I keep instinctively reaching for my coat when I leave the house. This winter was so long that early autumn is a distant, vague memory. But this weekend, we finally deemed it warm enough to start planting our veggie garden. While I out in some hardier plants like potatoes a little while ago, it was too frosty for the fun stuff- but now our tomatoes, herbs and three kinds of chillies are in, and it’s time to sit back and wait for our bounty (fingers crossed- we don’t really know what we’re doing!).

After all that digging and hard work, we’d worked up a sweat, and an appetite. There was only one real answer to both problems- ice cream! 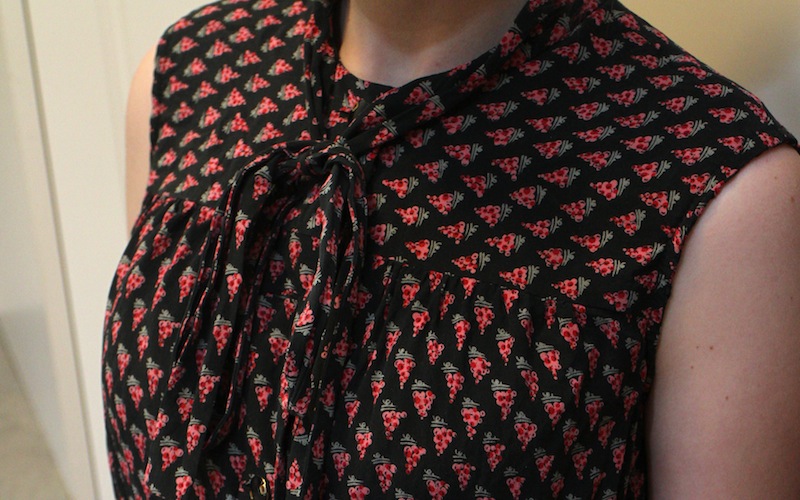 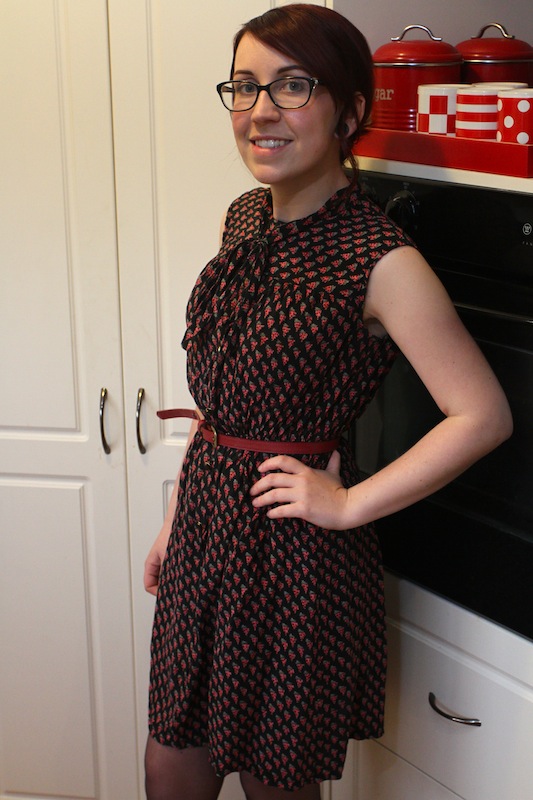 While Chadwiko is an Ice Magic devotee (I think it’s called Magic Shell in the US), it’s obviously not vegan and it gives me horrible migraines anyway. So I needed my own chocolatey, ice cream treat! What does the dress have to do with it? It’s caused some debate in our house, but I’m fairly sure that the print is of red grapes (Chadwiko still thinks its an abstract pizza print), which reminded me of a recipe I’d seen in one of my most recently acquired cookbooks, Joni Marie Newman’s Vegan Food Gifts- red wine chocolate fudge sauce! 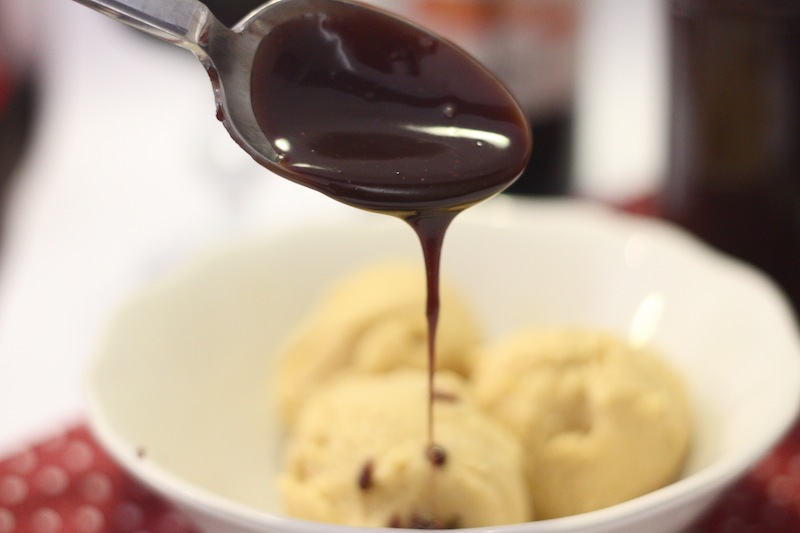 I was super excited about Vegan Food Gifts as soon as I heard about it- I’ve only recently fallen for making jams and preserves, so the idea of a vegan cookbook devoted to preserved treats, baked gifts and other such fun things was totally up my alley. There are a ton of really clever ideas in this book, including things I would never have thought to have made as gifts, but which I would definitely love to receive! My list of things to make is almost as long as the book’s index- good thing the gift-giving season is almost upon us! My fingers are crossed that my new jalapeño plants will provide me with the ingredients needed for some homegrown, homemade hot sauce before then. 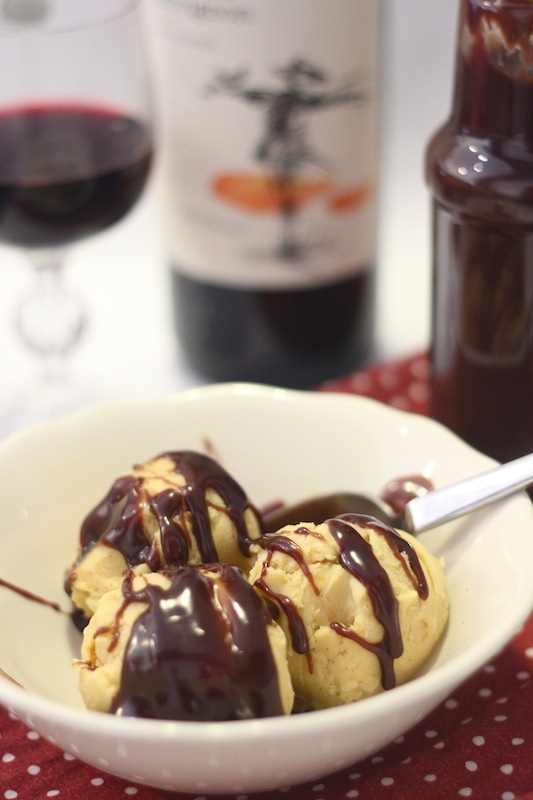 VeganMoFo has been keeping me busy though, so the red wine chocolate fudge sauce was the first thing I’ve actually made. I reduced the recipe, since it was just for the two of us, but this still made a ton! Good thing it’s delicious. The red wine comes through pretty strongly here, so it’s definitely an adults-only treat. It’s also super rich, so a little bit goes a long way. The sauce also takes on the consistency of a very thick ganache when chilled, which I think will be perfect as a filling in sandwich cookies of some sort. I can’t wait to play around with the leftovers- it’s the gift that keeps on giving! 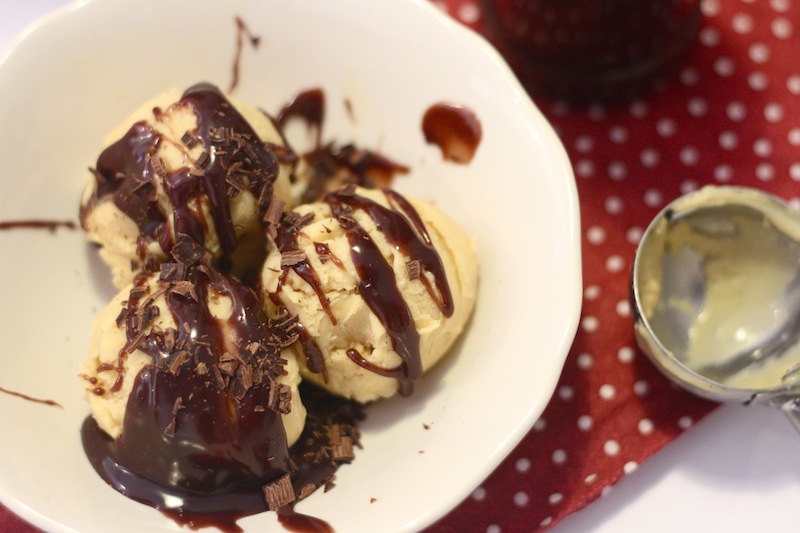 The ice cream pictured here is the French vanilla from Hannah Kaminsky’s Vegan a la Mode. This book is definitely at the top of my ‘best of 2012′ list. I’m obsessed! I’m usually not the hugest fan of vanilla ice cream, but this one is by far the best I’ve ever tried, vegan or otherwise. This is the second time I’ve made it- you know a vanilla ice cream recipe is good if I turn to that one over the other amazing-sounding recipes in this book! Other ice creams I’ve made so far include peanut butter bombshell (peanut butter with roasted peanuts and cookie bits), strawberry lemon curd, double chocolate fudge chunk and malted salted cashew.

Getting to use this book more is the other reason I’m most excited for the warming weather. It might even be more important than my garden! I can’t wait to get stuck into some of the other super creative flavours (I think cheesecake might be next). But first, we’ll have to finish all this French vanilla- it’s a tough job, but someone has to do it.