The end of VeganMoFo is so close that I can smell it! Or maybe that’s all the last minute baking taking place in my kitchen. I thought that today I might reminisce about VeganMoFo 2011, or at the very least, a dress I bought during it!

I picked up today’s dress in October last year, in Sydney. It was a whirlwind visit for work- I flew in in the morning, worked from the office there for a couple of hours, took a quick lunch break, headed off to the launch of a policy document we’d written, then was straight back to the airport to head home. Of course, since the office is just a few blocks away from one of Sydney’s better shopping streets, my lunch break was less about lunch, and more about picking up something cute during my half hour of relative relaxation. 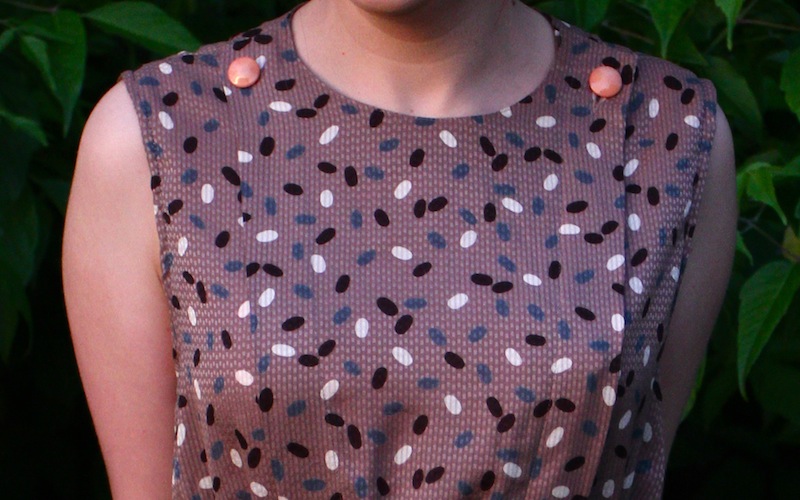 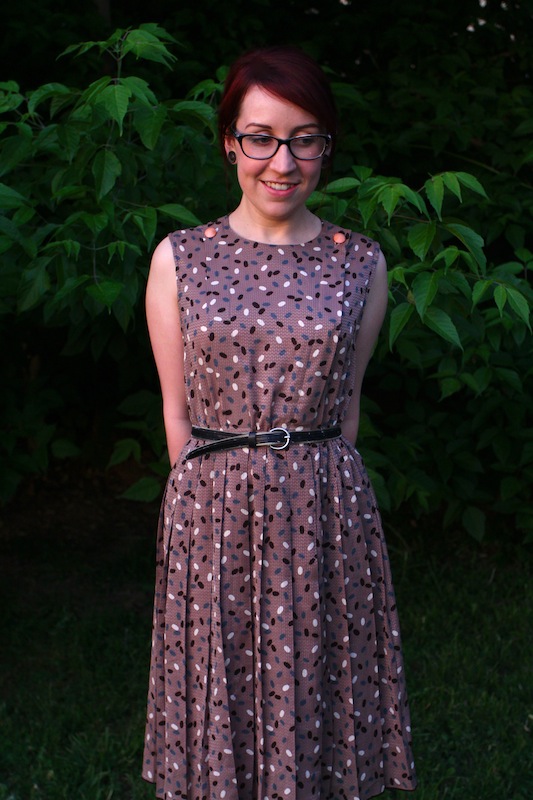 Just in time, I found this dress, bought it and jumped into a passing taxi to get to the launch. Halfway there, I realised that I hadn’t made time to eat- but past Erin had had the foresight to throw a Jokerz bar (my last one from the 2011 Living Green Festival!) into my handbag.

For the non-vegans reading (ie. my mum), Jokerz bars are the vegan version of Snickers, and they’re my favourite (hint). Since a Jokerz bar was pretty much all I ate on the day that I bought this dress (okay, until I got to the airport and ate like three bags of potato chips), I decided to recreate my favourite chocolate bar- in brownie form! 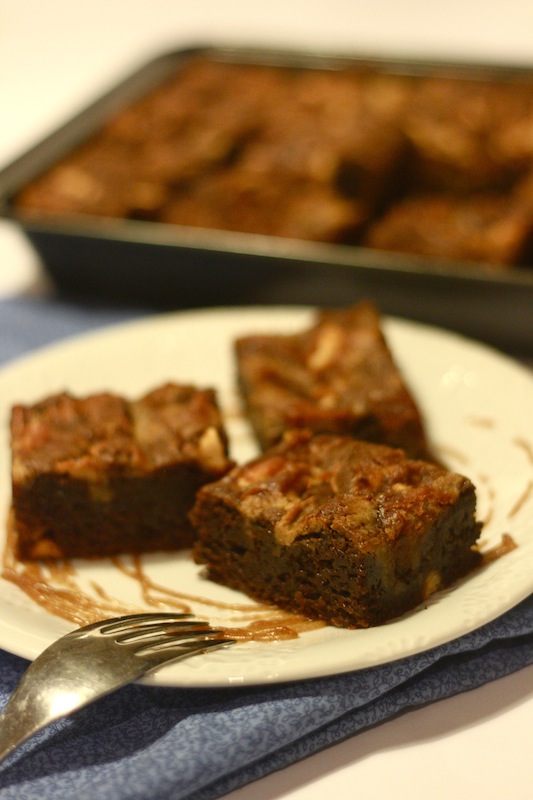 I used a handful of different recipes here. Joanna’s brownie recipe was, of course, the main one. I’ve had this recipe bookmarked forever, and this seemed like the perfect occasion to finally try it out. The recipe is a bit fiddlier than others I’ve tried, but the results are worth it. I’ve clearly taken some liberties with the original recipe this time around so I’m not sure if it’s my all time favourite- but it’s definitely close. Best of all, it’s super pantry friendly (whereas my definite number one recipe, a tester from Kelly Peloza’s upcoming book, is a little less so), so I can see myself whipping these up at a moment’s notice. 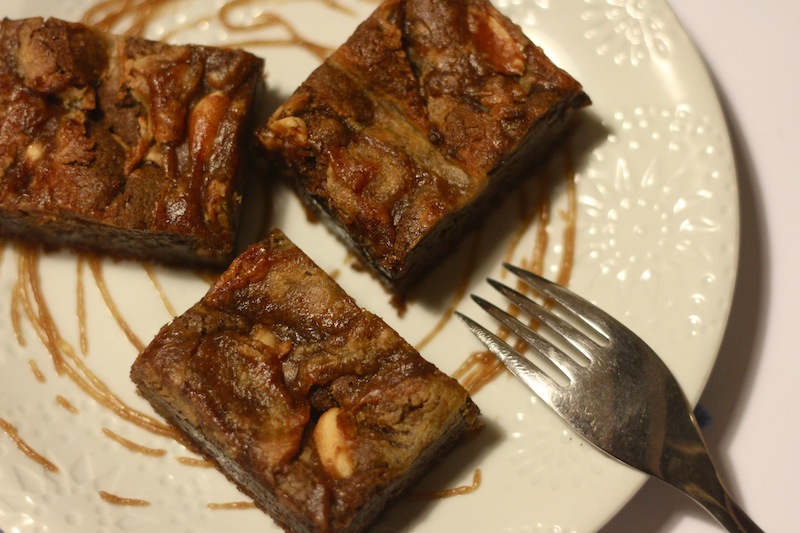 I’d seen a few similar vegan nougat recipes online, so I took the general idea behind them and threw together my own version- 1/3 cup peanut butter, 1/3 cup soy milk powder, 1 tablespoon maple syrup, 1 teaspoon vanilla essence, and enough soy milk to give it a similar consistency to the brownie batter (about four or five tablespoons). I haven’t had great luck making traditional caramel before, and I wanted a quick, foolproof recipe for this part of the brownies. Fortunately, this week’s cookbook for the PPK Cookbook Challenge is Chloe’s Kitchen, and while flipping through the pages I noticed her recipe for date caramel. Perfect! This was super easy to make, and delicious (although I had to add a pinch of salt). No one would ever have guessed that it was made from dates (shh, Chadwiko doesn’t know either!).

After pressing the (super thick!) brownie batter into the pan, I dolloped tablespoons of peanut butter nougat, date caramel and roasted peanuts on top, and cut them through the batter with a knife. The result? A swirly, gooey, brownie mess. 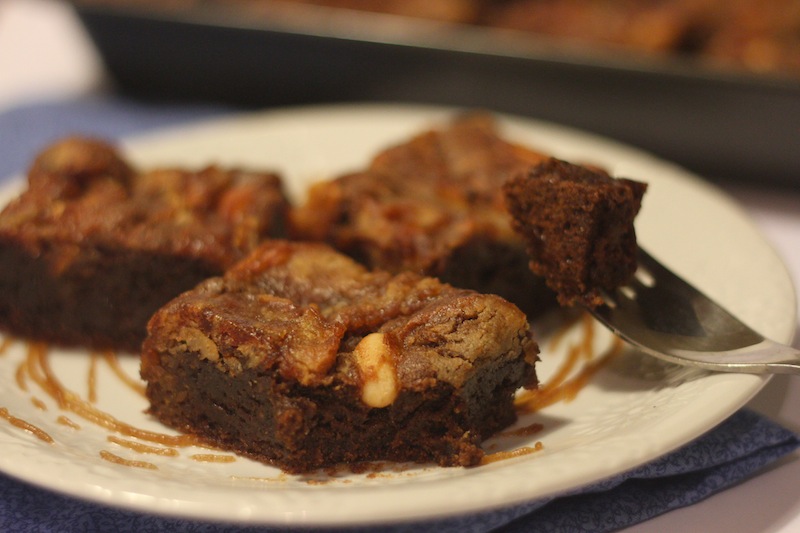 But a delicious mess! These taste every bit as decadent as they sound, and I’m currently feeling pretty sick from having eaten not just one of these, but a reasonable amount of pre-baking caramel and nougat (taste testing during the process is very important!). Fortunately, this made 18 small brownies in my brownie pan, so there are plenty to ration out in small doses.

These were a total hassle to make so they won’t be my to-go brownies… but at least an hour in the kitchen is quicker than a week waiting for my online delivery of Jokerz bars to arrive! I guess convenience is all relative. 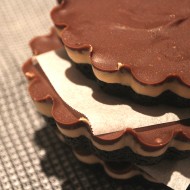